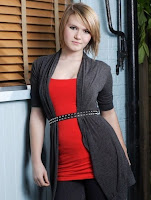 Melissa Suffield doesn't understand why she was axed from 'EastEnders'.

The 17-year-old actress who was sacked from her role as teenage tearaway Lucy Beale in the BBC soap earlier this year believes that even though she has been spotted out partying, she hasn't done anything seriously wrong like other teenage stars.

She said: "Lucy is a character but I wouldn't say she's exaggerated as I know people who behave like her. It's not an excuse for my own behaviour but it does make my actions seem fairly minor.

"Out of all the things Lucy has done, the only one I've done is drink underage. I understand that I'm in the public eye, but there are plenty of famous teenagers getting away with much more - just look at Taylor Momsen. It's not like I was going out punching photographers and being sick in a gutter."

Despite enjoying her time on the show, Melissa who played Lucy since 2004 wasn't too upset to be dropped because she was sick of being told what to do.

She told Reveal magazine: "People expected me to be gutted, but I wasn't. I loved 'EastEnders' and it was an amazing start to my career. I made lots of friends and I couldn't have asked for better storylines - they put so much faith in me. But, as an actress, I had already started to worry about being stereotyped. It was a good time to slip out. I don't want to live my life in fear of being told off until I'm 18."