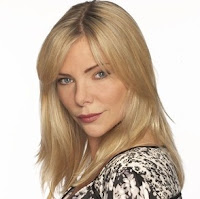 EastEnders Ronnie Mitchell is horrified to learn her mother knew she was being abused by her father.

A row between the club owner's aunt Peggy and mum Glenda leads the Walford matriarch to misunderstand a comment made by Glenda about the abuse Ronnie suffered at the hands of her dad when she was younger.

Glynis explained: "Peggy misinterprets what Glenda says, and jumps to the conclusion she knew about Ronnie's abuse all along.

"Glenda backtracks and says she really meant to say something else, but Peggy doesn't believe her. After that, Glenda is terrified she will say something to Ronnie."

Upset Glenda turns to drinking but ends up making the situation worse.

Glynis added to Inside Soap magazine: "Glenda spots Peggy talking to Ronnie and assumes she's telling her everything.

"So she blurts out that Peggy got the wrong end of the stick. It turns out that Peggy wasn't saying anything at all. Ronnie wants to know what Glenda's talking about and it's too late to take it back."

As Ronnie realises her mother had an idea she was being abused, she tells Glenda she no longer wants to have anything to do with her and her sister Roxy soon follows suit.