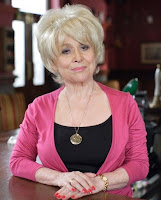 Barbara Windsor has revealed how she was reduced to tears after she was banned from telling her EastEnders co-stars of her impending exit.

The soap matriarch, who bowed out as landlady Peggy Mitchell after 16 years, couldn't stop crying at the ruling.

She told the Daily Mirror: "After I'd handed in my notice, I went through enormous stress as I wasn't allowed to tell my friends - I just wanted it out there, it was a huge weight to carry and I'd come home crying as I just felt so dishonest."

Barbara wanted to tell the news to her close friends on the long-running soap, especially her on-screen family.

The 73-year-old said her decision to leave came because she stopped enjoying her time on the soap.

"I wasn't laughing or singing around the house - I had stopped being fun," she revealed.