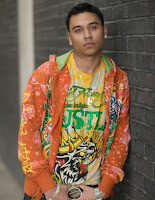 EastEnders Ricky Norwood has admitted he is sad to be saying goodbye to E20 co-stars Sam Attwater and Emer Kenny.
Ricky is staying on as Fatboy in EastEnders and E20, but the second series of the BBC soap's spin-off online show for young people has seen Sam and Emer's characters Leon and Zsa Zsa leave to make way for an all-new cast.


He revealed: "We've been doing a lot of the leaving scenes for Leon and Zsa Zsa - it's been pretty sad because we've started the journey together."
He added: "I'm there, luckily they are keeping me and they see some future in Fatboy."
The second series of E20 has seen Fatboy joined by Sol, played by Tosin Cole, Stevie, played by Amanda Fairbank-Hynes, Naz, played by Emaa Hussen and Asher, played by Heshima Thompson.
Ricky isn't even sure how long he thinks Fatboy will stay in EastEnders.
He said: "I haven't got a clue how long I'll be there. I'm there until Christmas at the minute and hopefully a bit longer."
Source - MSN
Email Post
Labels: Fatboy Leon Small Zsa Zsa