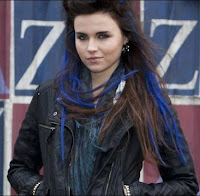 EastEnders star Emer Kenny has revealed the door has been left open for her to go back to the soap.

The actress joined the show as feisty Zsa Zsa Carter in January after writing and starring in the online spin-off, EastEnders: E20, but has now finished filming at the soap.

Speaking of her forthcoming exit, she said: "All I can say is it's a very Zsa Zsa ending and it suits the character. The door is open, which is very nice - I'd absolutely consider going back."

Despite suggestions the actress had been axed from the soap, EastEnders bosses insist it was her own decision to leave.

But she still found it tough to say goodbye. "It was really emotional. It's just like leaving behind a massive family. I really miss it but onwards and upwards."

Emer penned the first episode of the second series of EastEnders: E20, which will be broadcast on the EastEnders website and on BBC Three.

She said: "I really wanted it to start with a bang. As soon as you come in it's exciting, there's sex and romance and kissing. I wanted it to be really fresh."

She has also written herself, along with her co-stars from the first series, into the episode so that the two series are linked.

"It's just a tiny moment. I don't play a significant part. I just wanted to have the old one coming into contact with the new one and the passing the baton."