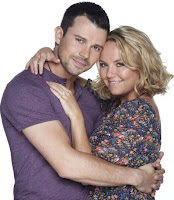 EastEnders Janine Butcher tells fiance Ryan Malloy she kissed another man while standing at the altar.

The money-grabbing temptress, played by Charlie Brooks, admits she went home with a wealthy older man on her hen night, but insists nothing happened.

Neil McDermott who plays Ryan in the hit BBC One soap explained: "Ryan does worry that Janine might not turn up on the big day. So when Janine arrives at the registry office, Ryan breathes a sigh of relief.

"However, during the ceremony, Janine pulls Ryan aside and confesses to him that she went home with another guy the previous night. She tells him nothing happened and apologises - which Ryan accepts. It's certainly not a conventional relationship, and he understands Janine's reasons for doing what she did."

Despite the wedding going ahead as planned, the troublesome twosome's problems don't stop there.

Ryan who is unaware he fathered Stacey Branning's baby daughter Lily, is cornered by his former flame in the Queen Vic, who is about to reveal the truth to him when flames engulf the pub.

Neil added to Inside Soap magazine: "Stacey starts pestering Ryan and tells him she really needs to talk to him. Obviously he has no idea that she's trying to let him know little Lily's his daughter.

"Suddenly there's a huge explosion, and everyone grabs their nearest and dearest to make sure they're safe. Stacey's trapped upstairs, and manages to break a window to alert people that she's there. Ryan's got a bit of a hero mentality, so he climbs up to take little Lily from her mum's arms."