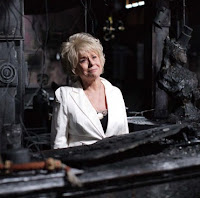 EastEnder's Peggy Mitchell gazes in despair at the charred remains of her beloved Queen Vic after her memories and livelihood went up in smoke.

The resilient pub boss, played by Barbara Windsor, survived the inferno on Thursday night, but on Friday night she will be seen bowing out of Albert Square to make a fresh start on her own.

As terrified punters evacuated the pub in last night's edition, Peggy risked her life to dash back into the flame-engulfed bar to rescue her son.

She and Billy Mitchell managed to drag Phil out of the Vic with just seconds to spare just before an explosion rocked the Square. As fire fighters arrived on the scene, she said of her boozer: "Let it burn."

In Friday night's episode, Peggy makes the toughest decision of her life - to leave her family behind and stand on her own two feet.

The instalment also sees Peggy pay a visit to Stacey Branning, who survived the blaze as well.

Armed with the knowledge that Stacey killed Archie Mitchell, Peggy tries to persuade the young mum to take the blame for starting the fire.

Peggy's exit brings the curtain down on Windsor's Albert Square career, which began 16 years ago.

Peggy's final episode will be broadcast on BBC One at 8pm on Friday and will be followed by EastEnders Revealed - Peggy Mitchell, Queen of the Vic at 8.40pm.