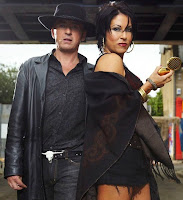 Shane Richie is excited to be a part of "the biggest soap story in the history of soap".

The actor who has recently returned to 'EastEnders' as loveable Alfie Moon following a five-year break - admits he and Jessie Wallace, who plays his wife Kat Moon, knew they had to return when they heard what show bosses had planned for their characters.

He said: "I got a phone call to ask if I'd be interested in coming back to 'EastEnders'. I spoke to Jessie and she'd had the same phone call so we had a meeting last year with Brian Kirkwood who is the new executive producer there. He came and sat down with us and told us about this new storyline which was going to go on for the best part of a year, maybe two years and we kinda went, 'Wow'.

"I can honestly say that after being involved in 'EastEnders' for a long time that it's going to be the biggest soap story probably in the history of soap. I'm putting my neck on the line here. It's a big thing to say."

While Shane refused to divulge plot details, he revealed that further meetings with producers had left him "foaming at the mouth" with excitement.

He explained: "We just had another meeting with the exec producer and me and Jessie are almost foaming at the mouth knowing what's going to happen. It really is going to be massive."

The 46-year-old actor confirmed the Moons will take over the Queen Vic pub which was recently gutted in a fire and quickly make it their own.

Anonymous said…
I have to say I've been reading this blog for a couple of years now, and since the live episode, the posts have become very dry. I read this exact same article in Digital Spy early last week. I've become very disappointed in this blog and if this continues, I will not read it anymore.
Monday, 27 September, 2010