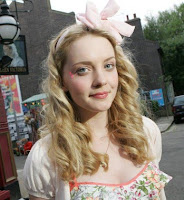 EastEnders: E20 newcomer Stevie Dickinson will have to cope with unrequited love in the online spin-off's second series, the actress who plays her has revealed.

Amanda Fairbank-Hynes said her daydreaming alter ego will fall for a character from the main EastEnders cast.

She said: "She has a bit of romance going wrong at the beginning, and then she falls for a character in the main cast quite early on. It's funny how it plays out through the series, it's not really reciprocated."

The 23-year-old said her privately educated character "sticks out like a sore thumb" in Walford.

"She's quite naive, she's a bit of a daydreamer. which makes people think she's sometimes a bimbo but she's not, she's in her own little world," she said.

"She's got her own problems and is quite alone at the start. It's about her transition to finding a family of her own.''

Stevie joins new faces Naz, Asher and Sol in series two of the online drama, which is broadcast on the EastEnders website and in omnibus editions on BBC Three.