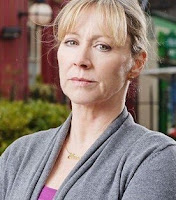 EastEnders star Lindsey Coulson has confessed she was shocked when she learned her character was to bed a teenager.

In Albert Square, Lindsey's character Carol Jackson is reeling from grief over the sudden death of her son Billie, who fell victim to alcohol poisoning.

It leads to her falling into the arms of Billie's friend Connor.

Lindsey told Inside Soap: "I thought 'Whoa!' when I read the scripts. I have an 18-year-old daughter, so for me it's like, don't go there.

"For her, though, this is a brief moment where she doesn't have to think about Billie's death. It's not even lovely sex - it happens in a fit of loss and grief."
Email Post
Labels: Carol Jackson Connor