EastEnders Christmas all about Stacey 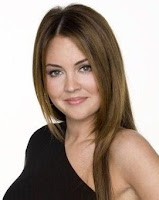 Stacey, played by Lacey Turner, is bowing out of the show after a long stint in Albert Square.

Asked what was coming up for Christmas, Bryan told This Morning: "Lacey Turner will be leaving us. It's really sad to say goodbye to Lacey."

He went on: "Stacey had massive storylines over the last five years. Christmas will be all about her. It will be a suitably dramatic and fitting departure for one of the all time greats."

However, he refused to say whether the door will be left open for the character's return.

Anonymous said…
Lacey Turner is a brilliant actress. She's been given some heavy duty storylines and always convinces. I will miss her in EE but hope she goes on to stardom in other acting roles.
Tuesday, 26 October, 2010

Anonymous said…
Lacey Turner is so pretty but i am wondering if lily is going to be ok because jenine that bitch and ryan malloy is going to kidknap baby lily
Wednesday, 27 October, 2010

Anonymous said…
i dont think they should take stacy out of eastenders she a very good actress, that janine horrid she cant act.
Friday, 29 October, 2010

Anonymous said…
I hope stacey has a happy exit, and that she comes back to eastenders, the show will be crap without her! Anyway good luck Lacey!x
Friday, 10 December, 2010

Anonymous said…
janine is proble one of the best actresses in eastender atm..... the fact that everyone including me hates her shows that she is deffo very very good at playing her role..!!
Friday, 10 December, 2010

Anonymous said…
I hope Stacey, Lily and Ryan don't die...sad to see her leave but I heard that they are leaving the door open for her return. I think Janine can act cause everyone hates her...and isn't that the point???
Friday, 10 December, 2010

Anonymous said…
Stacey's going to have to do the time for killing Archie because soaps aren't allowed to literally let characters get away with murder anymore! So she either dies, or is off for a long stint at Her Majesty's pleasure. Will be a shame as I think she's a fab actress.
Tuesday, 14 December, 2010

Anonymous said…
Lacey Turner is a great actress! I love her on EastEnders and I'll hate it when she goes but she deserves to do bigger things as her acting abitlity is exceptional! I hope she will return though like Kat and Alfie!I think everybody hates janine and wants to see Lily, Ryan and Stacey together but this is EastEnders so it probably won't happen! Good Luck love biggest EE fan there is!!! xxxxxxx
Wednesday, 15 December, 2010

Anonymous said…
how pathetic this character has broken more marriages than i have had hot dinners. She caused Bradley's death and after a one night stand claims another character is the dad of her baby. However, time will tell if the person playing this awful character can act, but the actress playing Janine has already proven she can act outside of Eastenders. She is one of the few actresses from that soap that has actually worked outside the show. Actors such as Jessie wallace and Shane Richie have to keep coming back??? to Eastenders. They cannot get acting parts anywhere else and and my insticnts tells me the actress who plays 'winging' Stacey will be the same.
Friday, 17 December, 2010

Anonymous said…
just seen the xmas advert, ronnie and roxie will find out, owch ;/ hope she'll come back in the near future she is a great actress!! xx
Tuesday, 21 December, 2010

Anonymous said…
Stacey is my best charactor in Eastenders please dont let her go! Eastenders won't be the same without her cause she makes it more interesting and lively! I hope she has a happy exit and not a tragic death and I hope she comes back later in the show. I also would like it if they brought some other charactors back that have left like Shaun Slater or Little Mo! If Stacey does go please make some of the storylines more interesting or add more charactors and include the charactors already on set like syed and christian and ronnie and roxy! I hope Lacey Turner gets a better acting job and maybe make films that i could watch. Lacey is basically my idol!
Wednesday, 22 December, 2010

Unknown said…
Lacey is a great actress, and it's a shame she has chosen to leave, I only hope she finds somewhere as good as Eastenders to work now.
Saturday, 25 December, 2010