Kat and Alfie to recreate wedding 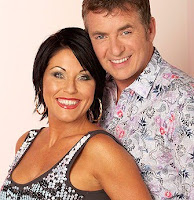 EastEnders Kat and Alfie Moon are to set to recreate the wedding they had seven years ago.

Next week, viewers see Alfie, played by Shane Richie, propose to Kat under a full moon and ask her to renew their vows.

According to the Sun, Kat later dons her 2003 wedding dress to remarry Alfie in the Vic, but throws cake in his face when things go awry.

Jessie told the newspaper: "Alfie has this big idea they'll recreate their wedding in The Vic. But it all goes wrong as he's too busy being a knight in shining armour for Jack Branning and Ronnie Mitchell."

Despite the hiccups, the ceremony goes ahead and the pair "wed" once more.

The scenes, to be broadcast on November 11 and 12, are apparently so convincing that Jessie's daughter Tallulah thought they were getting hitched for real.
Source - MSN
Email Post
Labels: Alfie Moon Kat Slater