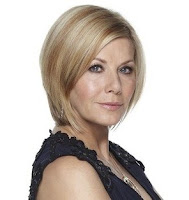 The 55-year-old actress, whose blonde bombshell character is currently trying to seduce Ian Beale, revealed to Inside Soap magazine she wouldn't trust Glenda as a friend.

Glynis said: "As Carol said on screen, Glenda's not a woman's woman - she's more of a man's woman. I don't really take to people like that, to be perfectly honest.

"I get on very well with women, and I'm always slightly suspicious of anyone who's only interested in men, so that wouldn't endear her to me in real life.

"However, she'd probably be great fun on a night out."

She might not like Glenda, but Glynis is great friends with Samantha Womack and Rita Simons, who play her on-screen daughters.

She said: "I've formed good friendships with both my girls. Sam and Rita are great and I love working with them."