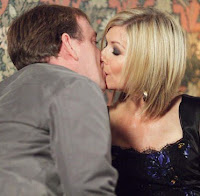 EastEnders Ian Beale is to enjoy a saucy smooch with Glenda Mitchell.

The Walford weasel played by Adam Woodyatt will be pursued by the middle-aged singleton after her hunt for a toyboy goes wrong, and Phil Mitchell knocks the hopeful temptress back.

Glynis Barber who plays Glenda in the BBC One soap explained: "Everyone is up for grabs. She sees Carol with her young hunk, Connor, and it prompts her to go on her man hunt! She gets all dressed up, but doesn't get very far. Connor thinks she's a bit sad.

"So she prepares to go out and look over the men of Walford to see if there's any lover material. She wants a man with money. She needs an alpha male, someone who can control her but also take care of her. Glenda starts to notice Phil's alpha-male status. But he plays very hard to get."

After conceding she needs a man with money to pay the bills, gregarious Glenda sets her sights on Ian, who is in a fragile state after his long-suffering wife Jane announces she is living him.

Glynis added to Inside Soap magazine "She needs company and someone to pay her bills. So she goes with what she can get at that moment. Ian suddenly becomes more interesting after she hears about the businesses he owns.

"She's never paid him a blind bit of notice until now but her ears prick up! Jane says she doesn't love him so Ian's fair game. They end up at her place where he compliments her and ends up kissing her."