Rival soap barmaids battle it out 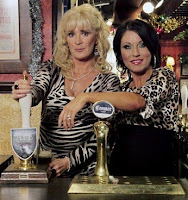 Rovers Return landlady Liz, played by Beverley Callard, heads down south to try her hand behind the bar in the Queen Vic, and Kat is soon whipping out her tape measure to make sure her skirt isn't too short.

There could also be trouble in store when Corrie's Michelle Connor takes to the karaoke microphones, lighting up the eyes of Kat's husband Alfie Moon.

Jason Grimshaw and Gail Platt are among the Corrie favourites who swan into the East End for the sketch.

Actor Shane said it was "surreal" working with the cast of the rival soap.

"I love watching their reactions. Helen (Worth) was lovely when I showed her round the Square. First thing she said was similar to when you bring a member of the public on the set - they always ask 'are those houses real..?' But I didn't expect to hear it from Helen.

"I've known Kym for a while, so for them to come down here and seeing Bev and Jessie behind the bar was strange."

Their antics will be shown as part of Children In Need on BBC One on Friday from 7pm.