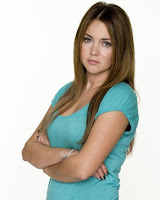 Stacey Branning is to become embroiled in a steamy love triangle prior to her dramatic Christmas 'EastEnders' exit.

The mum-of-one played by actress Lacey Turner will have to battle with her feelings for both married Ryan Malloy, who is the dad of her baby daughter Lily, and former flame Max Branning, the father of her late husband Bradley.

An insider revealed: "Her world is going to be turned upside down. She's falling for Ryan, but there could still be something between her and Max."

While Stacey's romance with Ryan looks destined for disaster when his furious wife Janine finds out about their steamy secret, she becomes increasingly close to Max as the pair struggle to keep the fact that she killed Archie Mitchell a secret.

The source added to Inside Soap magazine: "With the pressure on to escape Albert Square, everyone wants to know if Stacey is going to make it out alive and well and if she'll be taking anyone with her.

"Stacey has a fight on her hands. After everything she's been through, she deserves some joy at last. But there are lots of people hell-bent on making sure her entire life is destroyed."