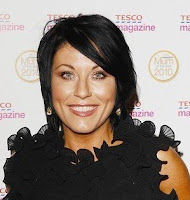 EastEnders star Jessie Wallace has revealed that EastEnders is "a happier place" than it was during her first stint on the show.

The actress has reprised the role of feisty Kat Moon, alongside Shane Richie's Alfie, five years after she left.

She told Inside Soap: "I feel a change compared to when I was here before."

She went on: "It's different, more chilled out. Everyone's really nice and it feels like a happier place to be. I'm so glad, and I'm having such a brilliant time now."

In her interview, Jessie revealed that Kat, who is pregnant with a baby that's not Alfie's, will show a different side of herself soon.

"Kat's coming to the end of her pregnancy, so you'll get to see her softer side as she changes. All Kat's ever wanted is to be a proper mother. The main thing for her, regardless of who the father is, is that she's having this child, no matter what."

Anonymous said…
well EE is like any other job; if the 'boss' is no good at his job, the workers ( in this case, actors) are not happy or productive.
i love the 'new' EE, a much happier, lighter place than it used to be, agree.
it was so dark before, it had no where else to go but up.
i love kat, alfie and the way they bring life and laughter back, well done, hope you don't change and get all dark again...
Monday, 08 November, 2010