EastEnders will have Corrie mention 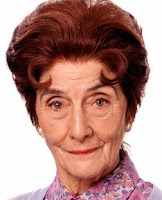 EastEnders is to include a reference to Coronation Street on screen as a tribute to the Weatherfield soap, which turns 50 this year.

The washerwoman tells her she's on her way home to open a bag of marshmallows, share them with Jim and watch Corrie.

The December 9 episode of the Walford serial will air at 7.30pm on BBC One before the rival channel broadcasts an hour-long episode of Coronation Street to mark its golden anniversary.

An EastEnders insider told the Sun: "We did it as a tribute. Hopefully they will return the favour when we turn 50!"

It is thought to be the first time a soap has given a nod to a rival.