Lacey can do anything, say co-stars 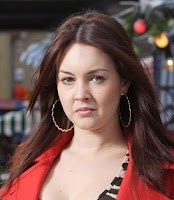 Lacey Turner's EastEnders co-stars have high hopes for her after she leaves the show.

The actress bows out of Albert Square on Christmas Day after six and a half years in Walford.

Although she insists she has no plan for what to do next, her friends on the show think she will be spoilt for choice when it comes to new opportunities.

Charlie Brooks, who plays Janine Malloy, said: "I am sad, but excited for her. There are so many great opportunities that are going to come her way. I think it's the right time for her to go."

Meanwhile, Neil McDermott, whose character Ryan Malloy has been having an affair with Stacey, said: "It's been great for me to have the chance to work with her over the last three months. She's a naturally gifted actress and hopefully she'll get loads of opportunities out there.

"She can do anything she puts her mind to. Acting comes really naturally to her. Whatever she chooses I'm sure she'll be successful."

Anonymous said…
I thought Jean really portrayed her part well just before she left to get her head together. Glad she's coming back in a few months.
Carol is the actress that made me cry with her acting skills after Billy died, good stuff, well done!
Friday, 31 December, 2010