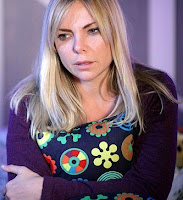 EastEnders bosses defended the show's baby swap storyline after it sparked more than 3,000 complaints to become one of the soap's most controversial plots.

Around 3,400 viewers have voiced concerns to the BBC about the episodes, in which tragic Ronnie Branning lost baby son James to cot death on New Year's Eve before swapping him for Kat Moon's live newborn, Tommy.

Only one other EastEnders story has prompted more complaints, when Danielle Jones was killed in a car crash moments after Ronnie found out the teenager was her daughter. More than 7,000 viewers contacted the BBC about that episode, which was broadcast in April 2009.

Executive producer Bryan Kirkwood said: "We appreciate this is a challenging storyline and have taken care to ensure viewers were aware of the content in advance of transmission.

"We also provided actionline numbers at the end of each show, offering advice and support to those affected by the issues."

Monday's episode, in which Ronnie struggled to cope with the baby and Kat did not recognise the dead child as her own, was seen by 10.6 million viewers.

Viewers have been registering their complaints since the storyline was revealed in November. It is thought that online lobbying action accounts for some of the objections.

The soap has worked with the Foundation for Sudden Infant Deaths (FSID) to ensure the issue is portrayed accurately.

EastEnders chiefs toned down some scenes from its New Year's Eve episode after a preview screening.

Anonymous said…
The 'baby swap' saga has to be one the most over the top storylines in EastEnders' history.

Not only is it a tacky storyline copied from 'Footballers Wives', but it is also painful to watch.

It won't be long before Phil Mitchell is taken off in a flying saucer and meets up with Fallon Colby!

The only good thing to come out of this storyline is the excellent acting by Jessie Wallace and Samantha Womack.

Isn't it time that Ronnie had a happy storyline? The character is beginning to bore me.

I hope the 'baby swap' storyline is wound up quickly!
Wednesday, 05 January, 2011

Kaylee said…
I think people are making too big a deal out of something that is just a soap.
I understand the issues are serious and it may bring some issues into light that arent recognised in everyday living, but this is not to say it isnt an entertaining watch.
How many of these protestors will start watching again after this one plotline finishes and their 'boycott' is over i wonder?
Wednesday, 05 January, 2011

Anonymous said…
I have to admit that Ronnie does bore me and has done for quite a while.
I do love the acting of Jessie Wallace and Shane Ritchie, those two are the reason I love to watch Eastenders.
Thursday, 06 January, 2011

Anonymous said…
The episode where Kat and Alfie visit 'their' baby in the hospital was so well acted by them both; had me in tears.

Ronnie's acting couldn't have been much of a challenge; she's always 'mooning' around, long face, don't know how anyone is supposed to be able to put up with her.

I can't wait till it's found out about baby Tommy, he's returned to K&A, and hopefully Ronnie'll be out of the picture for a while.
Thursday, 06 January, 2011

Anonymous said…
I had a friend who was only 20 years old who lost her baby daughter to cot death, and I think this storyline of the baby swap needs to end now. I watched my friend suffer so badly coming to terms with her loss, and EastEnders could have challenged the cot death plot from a different angle. Thumbs up to Jessie Wallace for her fantastic acting.
Thursday, 06 January, 2011

Anonymous said…
i dont see what all the fuss is about, its only a show. i do understand that people have lost their childern to cot death,but this just shows other people of how much it can affect people when this actually happens to them. i think ronnie is a brilliant actress and i like kat and alfie aswel. its only a show though. too fussy.
Friday, 07 January, 2011

Mumblesh said…
How ridiculous that people get so upset by what is simply a soap story line. It's not simply about educating as much as it is about entertainment.

I get that people can get emotionally wrapped up in a plot-line, but to suggest such a thing could never happen is frankly more ridiculous, read the news for Gods sake. The real world is sometimes more heart-breaking and even odder! The people that tend to moan don't even watch the soap, or are the kind of people that slap the actors in the face when they see them on the street, and berate them as if they're their character.

Grow up, this is exactly the kind of thing I could see Ronnie doing after her luck with having a child so far, and fits in quite well with her character's state of mind. Can we just enjoy where this goes and possibly tell Anne Diamond to get off her high horse while we are at it?
Friday, 07 January, 2011

Anonymous said…
This Is Getting P.E.E.K Its Not Even A Joke Ting And Then Ronnie Has The Ordasity To Tell Kat To Leave Her Alone When She Snuggling Up On Her Tommy By Tim

bruv this no jke ting u get me this is knd of depressing cuz who would do such a thing
by nath
Friday, 07 January, 2011