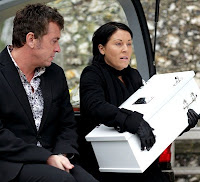 The show's storyline, which saw Ronnie Branning lose her son to cot death and swapping him with Kat Moon's healthy newborn, has become the most complained-about plot in the soap's history.

Show bosses have already brought forward the storyline's conclusion and revealed it will have a happy ending, but last week certain scenes that were already in the can were changed.

Scenes where Kat, played by Jessie Wallace, threw Tommy's toy lion into the grave were cut, as were the shots of her clutching his white coffin which the BBC had already issued as publicity pictures.

Scenes showing Kat and Alfie at their son's grave were also chopped, as was a monologue from Ronnie to her dead baby, James.

Fans took to internet forums to criticise the changes, which included the insertion of a chat between Jodie Gold and newcomer Poppy Meadow.

One user said on Digital Spy: "The Jodie and Poppy scenes seemed so out of place!

"I don't understand why cuts need to be made, surely if the storyline is ending sooner than normal then slowing down the pace by cutting out scenes such as a speech by Ronnie is going in the opposite direction?"

A show spokesman said the changes were "appropriate" in light of the response to the storyline, and insisted the trims did not detract from the plot.

kathleen said…
will ronnie get caught that she swaped the babies?
Wednesday, 26 January, 2011