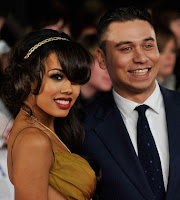 Speaking from the red carpet at the National Television Awards, the actor, who plays Fatboy in the soap, joked that his Sugababe other half would be a perfect addition to Albert Square.

Asked if he wanted her to join the show, he said: "That would be great for me. It would stop the bruises on my arm, let me tell you."

Jade responded: "Every time he kisses someone else, I'm like, 'Why do these writers keep making you kiss other women?' He doesn't warn me either so I have no moment to prepare. I just see it.

"I've got better. Now I just cringe. The first time I was a bit violent but not now."

Ricky left the evening triumphant after walking away from the awards ceremony with the most popular newcomer gong.

Anonymous said…
there soooo cute together! jade ewen should be on eastenders!
Sunday, 28 August, 2011