Oberman: I feel for Sam Womack 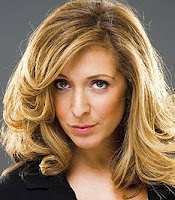 Ex-EastEnder Tracy-Ann Oberman can empathise with Samantha Womack over the public's massive reaction to her latest storyline.

Samantha, who plays Ronnie Branning in the soap, is at the centre of a cot death and baby swap plot that has sparked record numbers of complaints from the soap's viewers.

Writing in The Guardian, Tracy-Ann said the actress had been "all but pelted with rotten eggs" by people unable to separate fact from fiction.

She went on: "I know how she feels. As Chrissie Watts, I was overwhelmed by the public reaction to her character and her crimes."

"Admittedly I didn't get the rotten eggs, more congratulatory letters for bumping off one of soap's most memorable cads. But it could have gone either way."

She said EastEnders provokes far bigger reactions than some of the "dastardly deeds" she has had to commit on stage.

"As an EastEnders actor you crave a good storyline and hope to find yourself at the centre of a meaty plot. In this brilliant show, chances are you will. But if, on occasion, the public turns against a character or a story, the fallout for the actor is like nothing else."

But she said the soap's controversial plot has provoked a big discussion about cot death, which is "worth a few rotten eggs".

Anonymous said…
Hands down, Oberman is the one Eastenders not currently on canvas who should return. Cue Sharon directly behind her.
Friday, 14 January, 2011