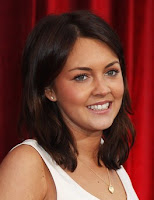 Ex-EastEnder Lacey Turner has admitted she was nervous about filming her first role outside the soap.

The award-winning actress, who played Walford's Stacey Branning for six and a half years, can be seen as Lia in two episodes of the new series of BBC Three's Being Human.

Asked if it was nerve-wracking to take on a new part, she said: "Yeah, it was, it is the only other TV job I've done since EastEnders. It's so different, we shoot 14 scenes a day [in EastEnders], we spend about half and hour to an hour to do a scene.

"I go to Cardiff for Being Human and you have the whole day to do a scene. It was nice because you got to play around with the character and try different things.

"The cast and crew were so lovely. The crew made me feel so welcome. I'd never been to Cardiff, never filmed anything other than EastEnders and they made me feel at home straight away, I really enjoyed it."

She said the set-up of the show gave her a chance to approach acting differently.

"As an actress you sort of want to try different things really, you want to explore different ways of doing things. On a fast show like EastEnders you don't have the time to do that - you have to decide which way you're gonna do it and stick to it. So it was nice to have the time to be able to think, 'I'll try this to see if it's better'."

kathleen said…
is stacey coming back in the future i would like to know and see her back miss her in the show ...
Wednesday, 26 January, 2011

Anonymous said…
That's great news about Lacey Turner; as an actress, she's too young to get stuck in the same show, same character.
It was probably a mutual decision that she leave the door open for a future return, rather than getting 'killed' off.
She may very well return years later, as many actors have.
Thursday, 27 January, 2011