Anita: I have no EastEnders regrets 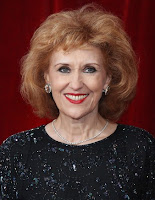 Anita Dobson has revealed she has no regrets about being in EastEnders.

The actress became a household name for her portrayal of emotionally battered and alcoholic landlady Angie Watts, winning record numbers of viewers for the BBC soap.

"I went from being a jobbing actress who was just earning a living to being the second most photographed woman in Britain, next to Princess Diana but it was exciting too and I wouldn't have swapped it for a second," she said.

"Wonderful things happened to me - I met my husband, I got invited to previews and premieres, I was asked to do fashion shoots, and front covers of magazines. You've just got to embrace it and do the best you can."

Anita, who is now presenting Ration Book Britain: Entertaining The Home Front, reckons her character's sense of humour made her an instant hit with viewers.

"I think it was the fact that she was a survivor and she was funny," she recalled.

"That's what drew me to the character, that she could be on the floor, drunk, weeping buckets, mascara everywhere, then drag herself up the next morning in that old blue dressing gown, tidy herself up and be in the bar that night telling jokes and looking a million dollars."