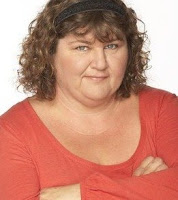 EastEnders star Cheryl Fergison has revealed fans flock to her like a magnet, and avoid co-star Linda Henry like the plague.

In the soap the pair play friends who are like chalk and cheese, with Cheryl playing the loveable Heather Trott and Linda the hard-as-nails Shirley Carter.

Cheryl revealed: "If I'm out with Linda people will come to me like a magnet and avoid her like the plague."

She went on: "They'll do a semi circle around her avoiding her and come the other way to me. So they'll be on my left hand side and nobody on her side. which is very nice.

"When I'm out they always want to give you a cuddle. Which is fine but a bit hard when you're driving in your car and you get a pair of arms shoot through your window in summer - that's a bit frightening but other than that nine times out of ten it's a positive thing."

The 46-year-old actress stars in her own special episode of the soap on February 15, which sees a day in the life of Heather, as she tries to battle all the troubles that come her way.

Cheryl said: "No matter how many times she get knocked down she gets back up again and I think that's the thing with Heather and the thing that people like with Heather.

"Being hopeful about the situation, her glass is always half full even when she's down to the lowest point. You know you've got to give her ten out of ten for trying every time.