Jessie Wallace: I missed being Kat 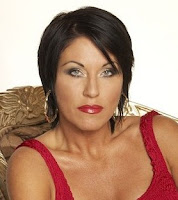 The 39-year-old actress returned to Albert Square last September after five years away from the soap, and said she feels like she's "come home".

But she revealed she was worried at first that she would have forgotten how to be the brash, outspoken character.

She said: "I was nervous at first because I thought I might have forgotten how to play her, but as soon as I stepped onto the Square, she came back to me.

"Even when I was out of the show, people called me Kat every day in the street.

"I was flattered and now I'm having a great time. The recent scripts have been brilliant."

Jessie has been part of the controversial baby swap storyline, with Kat thinking her baby Tommy has died when grieving Ronnie Mitchell is actually bringing him up as her baby.

Jessie defended the plot saying: "At times it was really difficult to film - I'm a mother myself. But I stand by it. We're actors at the end of the day - we do our job and we go home.

"This story is an emotive subject but I feel honoured that it's been given to us."

Anonymous said…
Jessie, i think the way you have portraid this role has been amazing. I watched tonight (30/3) and was moved to tears. I lost my baby at 39 wks due to a cord accident and feel that every emotion you have showed and the well written lines you have, have been so close the the mark thoughout the whole story line. Samantha Womak has been incredible too but i am in no way able to connect with her character or the personal struggle she is portraying so i am not feeling it. I just wanted to say that watching you has been very true to life and i have felt all Kats pain. You really have nailed it and you have been amazing. It has felt nice to cry with Kat because you have made it so real. Well done to the writters too. I don't like the plot ultimately but the acting has been amazing.
Wednesday, 30 March, 2011

shazzie said…
hi hun i think you have done all mums who have lost babies proud when u did the scene with jean about u r a mum but u feel lost i so understand i lost my little girl and u shown exactly how i was feeling .you have made me feel like im not mad but like so many other women you do have these feelings and for the 1st time in a long time i felt like i wasnt the only 1 who couldnt cope thank u with all my heart xxxx
Thursday, 31 March, 2011