Jodie and Darren 'are good match' 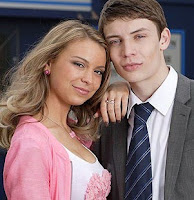 The duo are set to get engaged, and, despite their different personalities, the 23-year-old actress is convinced Walford's odd couple could be a success.

Speaking from the red carpet at the National Television Awards, she said: "They make a really good match. They're from different walks of life and seeing them together is a nice contrast.

"I think they make a nice couple, definitely."

But the actress remained coy about whether there would be a happy ending for the couple.

"They are getting engaged, but more than that, everyone needs to stay tuned and see what happens," she said. "There's exciting stuff."

jsb said…
How is it that Jack Branning knows Michael Moon? ...or the Moons at all? I thought Alfie was the first Moon on the square and that there wasn't a Walford history of the Moons.
Wednesday, 02 February, 2011

T said…
I am completely stunned that *anyone* thinks there is anything remotely good about the Darren character or the actor who plays him. I think they're both completely awful and I cannot believe he somehow survived the cull. Darren looks such a 'kid' and is completely not believable as a guy who is fancied by 2 girls on the Square (albeit one is only 14, and questionable judgement abounds at that age!)
Friday, 04 February, 2011