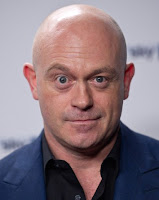 Ross Kemp has revealed that even when he was in EastEnders he didn't watch soaps.

The ex soap star, famous for playing tough guy Grant Mitchell in the BBC soap, admitted he doesn't like seeing himself on screen.

"I didn't even watch the soaps when I was in them because it's like a coal miner coming home and staring at the coal scuttle - I was never a great lover of watching myself act," he told the Radio Times.

Ross, who fronts Ross Kemp: Extreme World on Sky1, denied he would return to the soap for an episode.

"I've no plans to. I enjoy the fact that I've far more control over my destiny than I ever had when acting," he said.

He continued: "I come up with a lot of the ideas of the programmes. I oversee them as the executive producer. I'm on the ground when they're being made. I'm involved in the editing and write the commentary. I also write books and am attempting my first novel. I like to be busy."

"On the road the all-male crew and I would talk about Mad Men the way girls gossip about what happened in EastEnders last night; how she shouldn't be with him and he should be with her," he added.