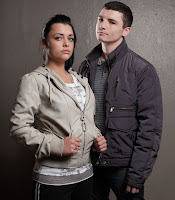 The BBC has defended a special edition of EastEnders for Comic Relief after viewers complained it was "inappropriate" for a family audience.

The 10-minute special, shown during the Red Nose Day telethon on March 18, continued a hard-hitting storyline about vulnerable teenager Whitney Dean played by actress Shona McGarty as she escaped the clutches of pimp Rob Grayson.

While acknowledging it was a "challenging" plot highlighting the issue of sexual exploitation, the BBC insisted the story had been told "accurately and sensitively".

"We are conscious that Red Nose Day programming includes many different tones and themes, ranging from light comedy sketches to difficult and emotional appeal films, all of which played out around the time the EastEnders episode was scheduled to transmit," the corporation said.

"The tone and content of the EastEnders piece was clearly sign-posted to viewers by the presenters in the studio before it was due to be played out. We hope that the majority of the audience would have heard the first extended warning and that the serious tone of the introduction, though truncated, pointed to the fact that the upcoming film was a gear change."

The BBC said the film was put into further context by presenters after it was screened as they discussed Comic Relief-funded charities working to help vulnerable girls.

It said the plot was "in line with with the show's long tradition of tackling difficult social issues", and had been researched thoroughly.

Actor Jody Latham, 29, who plays Rob, revealed earlier this week that he had spoken to prostitutes at a drop-in centre before filming his scenes with Shona on the soap.

The BBC said the menace and danger faced by Whitney has been "implied rather than graphic or sensationalised".