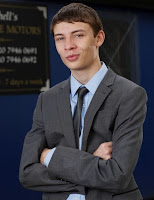 Single mum Heather, played by Cheryl Fergison, had to hand her tot to his dad Darren Miller, after she suffered carbon monoxide poisoning, amidst fears she was struggling with motherhood.

But the 20-year-old told All About Soap she should keep custody of her son, saying: "Heather should be the one looking after George because she's much more experienced than Darren and knows exactly what she's doing.

"Darren wants to play a big part in his son's life, but he needs to ease his way in gently!"

George suffers a nasty accident with curling tongs at the hair salon while in the care of Darren's girlfriend Jodie, in scenes next week.

Charlie added: "Darren realises they need to do things jointly. Heather can have George during the day and Darren can take him in the evenings. Darren knows Heather's an excellent mum."