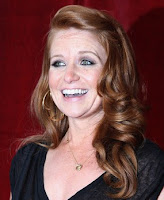 Patsy Palmer would like her eldest son Charley to join the cast of EastEnders.

The actress, best known for her portrayal of Albert Square's Bianca Butcher, reckons the work ethic of the BBC soap would help keep the 19-year-old on the straight and narrow, just like it did for her.

"I'd be really happy for him to be in EastEnders, it's quite old-fashioned and they are strict, they really look after young actors," she told The Sun.

"I hate to think what would have happened to me if I hadn't got that break as Bianca. EastEnders saved my life," the 38-year-old added.

Patsy who is on a break after giving birth to her fourth child Bertie last December has no problem with acting student Charley, her first-born from her relationship with boxer Alfie Rothwell, to pursue acting as a full-time career.

"I'm very happy for him to follow in my footsteps, just so long as he wants to act and doesn't have a notion of just wanting to be famous. It's very dangerous when kids say, 'I just want to be famous'," she continued.