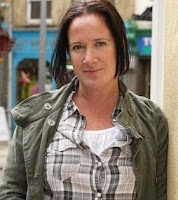 The 43-year-old has announced she will be bowing out from the BBC soap after eight months of playing feisty stall worker Julie Perkins.

The news has been confirmed by an EastEnders spokesperson, who declined to comment further.

The actress recently finished filming on the show, and viewers will see Julie depart screens in the coming weeks.

Her character left Billy Mitchell's (Perry Fenwick) life upside down when she turned up and revealed that they have an adult son together.

Julie has taken on various jobs, including a cleaning role at the Queen Vic and her current position at the market.

Danielle Harold has been cast as Julie and Billy's granddaughter Lola Pearce, causing speculation that her entrance will lead to Julie's exit from the soap.