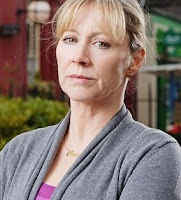 Lindsay Coulson can hardly believe her luck - she could be about to enjoy an on-screen fling with her former teen idol David Essex.

A spark will develop between Lindsay's character Carol Jackson and David's Eddie Moon after he stops Carol accidentally running over Roxy's daughter Amy when he arrives in Albert Square next week. And The Sun reports romance is set to blossom between them.

"Carol is delighted when he makes a move on her," an insider told the newspaper. "The attraction is there but they both have too much on their plates to start a proper relationship for now.

"Eddie is desperate to build bridges with his estranged son Michael.

"Carol's also got a lot on her mind with her dad Jim going into an old people's home. There's every chance that things will develop between them in the future.

"But for now their relationship has to be put on a backburner because the timing isn't any good."

Lindsay, 51, has confessed she used to be a huge fan of David Essex when she was a teenager.

She revealed earlier this month: "I went to all his concerts. Don't tell him - I was 14. He was lovely!"