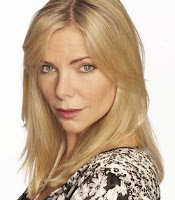 EastEnders executive producer Bryan Kirkwood has hinted there could be a happy ending for Ronnie Mitchell after the trauma of the baby swap.

Samantha Womack has left the show and Ronnie looks set for a spell behind bars after confessing to stealing Kat's baby son.

But Bryan told Inside Soap magazine: "Ronnie's already paying the price as Kat, Alfie and the rest of the community continue to react to her presence in the Square.

"But the question is: does Ronnie end up fighting back, or does she do the right thing?"

He hinted that although Ronnie is leaving, her marriage to Jack may not end in tears.

Bryan said: "I really wanted to return to the original love story between the pair. I believe in the fact that Jack always wants the best for Ronnie. But whether that's prison or a new life in the sun, you'll have to watch to find out."

He said the pressure put on the soap by those shocked at the baby-swap storyline has not altered the writers' original plans.

"This was always going to be Sam's exit from EastEnders. We're all really sad to see her go, but we're sticking to the storyline that we'd originally planned for."