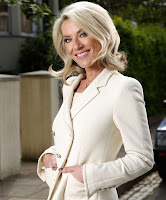 Zoe Lucker has been promised a big storyline before her EastEnders exit.

Executive producer Bryan Kirkwood told Inside Soap he "loved" the actress, who is leaving later this year, and that he is "really glad that she's getting a proper chance to shine."

Zoe currently plays Max Branning's glamorous girlfriend Vanessa Gold in the soap, and it's believed she will be left heartbroken by his affair with his ex-wife Tanya.

"People had better duck for cover when Vanessa finds out that she's been betrayed again," Bryan warned. "She stood by her ex-husband Harry for years and in no time at all, she finds herself in the very same situation with Max.

"The end of that relationship doesn't mean the end of Vanessa, though. She's got a really exciting storyline still in store. It kicks off over the summer and there's a big change of direction for the character that will really give Vanessa some momentum for the time she's got left in Albert Square."