Nicola Stapleton returns as a stripper 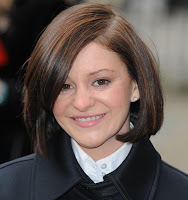 Nicola Stapleton is set for a skimpy return to EastEnders as a stripper.

The actress, and her wild child alter-ego Mandy Salter, left Albert Square in 1994, and it looks like her comeback could lead to sparks flying.

An EastEnders spokesperson told The Sun: "Mandy's grown up a bit but she's still fun, chaotic and wild - with a spiteful streak. She is a manipulative force of nature, so it's likely that she'll be causing trouble for at least one of Walford's residents."

Teenage runaway Mandy - Sam Mitchell's best friend and Ricky Butcher's ex - is discovered in a lap dancing club by Ian Beale (Adam Woodyatt), who offers to help her get back on her feet after seeing her in dire straits.

Nicola, who has had appearances on Bad Girls, The Bill, Casualty, Emmerdale and Hollyoaks, has spent her first week of filming in her smalls.

"Nicole doesn't look like she has aged since she left. She looks amazing," a source told the paper.

"She found it a bit strange to film her first scenes in underwear and bikinis but she joked that she might as well jump straight back in."
Email Post
Labels: Ian Mandy Salter