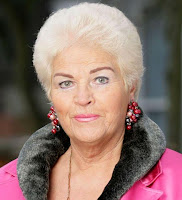 EastEnders veteran Pam St Clement is to bow out of Albert Square, more than a quarter of a century after making her debut as no-nonsense Pat Evans.

The actress, 69, one of the longest serving stars of the show, will leave Walford later this year.

Pam said she had other things she wanted to do but said leaving the soap would be like a "bereavement".

During her colourful years in the show, Pat remarried several times, has gone to prison and enjoyed affairs with Walford characters such as infamous lothario Den Watts.

Pam joined the BBC One show in 1986, a year after it launched and became noted for her dangly earrings and brassy bleached hairdo.

She was first seen after arriving in the Square to break the news to Pete Beale that he was not the father of her son Simon Wicks.

Pam said: "I have enjoyed 25 and a half wonderful years in EastEnders creating the character of Pat but feel it's time to hang up her earrings. Leaving the EastEnders 'family' will be akin to a bereavement.

"But I'm looking forward to the other work and life opportunities that I will have the time to pursue."

Viewers have seen her marry Frank Butcher in 1989 and then her fourth husband, Roy Evans, in 1996.

The BBC would not say how she will leave the show at this stage.

Pam is second only to Adam Woodyatt who plays Ian Beale as the longest-serving member of the cast.