Patsy: Bianca will show softer side on her return 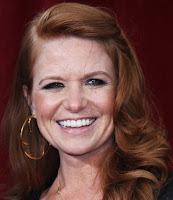 Patsy Palmer has revealed that her EastEnders alter-ego Bianca Butcher could become a new, nicer person, following her prison spell.

It might be hard to imagine that Albert Square's feisty firecracker - last seen confessing to attacking womaniser Connor Stanley before she was taken to jail - could show a more vulnerable side, when Patsy returns later this year.

"I love playing Bianca but she was always miserable. But after her experience in prison, I think we'll see a different, softer side to Bianca, which will be a new challenge for me," she told the Daily Mirror.

"Lots was left unexplained and all this will come out when I'm back in Walford and out of prison."

Patsy, who left the BBC1 soap in January to give birth to baby Bertie, is looking forward to her return. She starts filming in the autumn and will be on screens before Christmas.

"I'm really excited as I've got some great storylines coming up. It will be good to see Bianca back on screen, if only to stop the fans asking when I will be back. And it will be great working alongside some of my old friends again - especially Rickaaaaay!" she continued.

"I'm loving David Essex in it and wish he'd get it together with my screen mum Carol because he fits in the show so well. I used to have a crush on him when I was younger so I hope he's there when I start filming, as I might make Ricky jealous."
Email Post
Labels: Bianca

Anonymous said…
I can not wait It well by nice to see bianca back on the square again thank you very much.
Saturday, 03 December, 2011