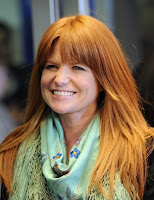 Patsy Palmer has confirmed that she will be returning to Eastenders later this year.

Speculation around her future on the BBC soap was rife after the actress made an abrupt departure from her role as Bianca Butcher in late 2010 when she gave birth to her fourth child Bertie weeks before he was due.

However, she revealed today that she has signed a special "working mums" contract which helps her juggle her work with family life.

In an interview with The Mirror today, she explained: "I honestly thought I wouldn't go back. I wanted to make sure Bertie was 100% healthy and EastEnders is relentless. Even now I don't know how I'm going to do it. I'm a mother of four wonderful kids and they come first. Like most working parents, juggling everything can be difficult but my new contract will give me more time with my family.

"The trade-off is less money as we only get paid for what we do but the most important thing is that I will be there for all their important dates like sports and parents days, school holidays and things like that. And viewers won't notice because of the way they will schedule filming."

She added: "I start filming in the autumn and will be on screen before Christmas and I'm really excited as I've got some great storylines coming up."
Email Post
Labels: Bianca

jojo said…
well done patsy you should be proud of yourself a good mum a good actress. Someone to look up to:-)
Thursday, 21 July, 2011