Tony Discipline is 'like a brother' to EastEnders star 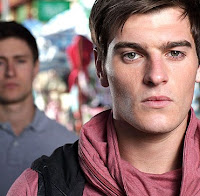 EastEnders newcomer Matt Lapinskas has revealed that co-star Tony Discipline, who plays his screen sibling, has become like a brother to him.

The actor, who is playing Anthony Moon in the soap alongside Tony's Tyler Moon, told Inside Soap he was settling in to Albert Square well.

"Tony's already like the brother I never had! We've got dressing rooms next to each other and have a great relationship off set," Matt said.

"That comes across very strongly onscreen, I think."

But despite their strong bond offscreen, he admitted that the two characters could not be more different.

"Tyler's hot-headed, whereas Anthony would never be seen in a fight. He's a thinker and likes to talk his way out of situations.

"Also, Tyler will chat up anything with a pulse and be successful - but while Anthony can get the girls, once they've been on a few dates with him, they'll be bored," Matt revealed. "He always overcomplicates things!"

The actor added that he was also loving the chance to work with singer David Essex, who plays the pair's screen dad Eddie.

"He's such a nice guy," he said. I knew who he was before I started because my mum and aunt are massive fans. I said to them casually, 'Yeah I'm auditioning for a role and David Essex is my dad' and they were like, 'Oh my God!'."
Email Post
Labels: Anthony Moon Eddie Moon Tyler Moon