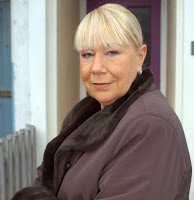 Laila Morse thinks the injury she got while on Dancing On Ice might have to be written into EastEnders.

The actress needs surgery to her shoulder after tearing some tendons during rehearsals for the ice skating competition, and she told The Sun that she still might be wearing a sling by the time she returns to the Square.

She said: "[Skate partner] Lukasz said my shoulder will take about 12 weeks to fix because it is a tear."

"I can just go back to EastEnders and pretend I have been hit by a bus or something. I have had an accident on holiday or something with Fat Elvis. They can come up with something."

Laila added she was relieved to have been booted off Dancing On Ice because she was missing her EastEnders co-stars Jessie Wallace, Shane Richie and Gillian Wright.

She said: "No regrets but I'm glad I'm out. I do miss my friends Shane, Jessie and Gillian, and the rest of them."
Email Post
Labels: Big Mo