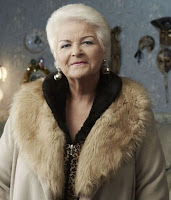 Pam St Clement may have bowed out of EastEnders as one its best-loved characters, but she expected hate mail when she first joined.

The actress, who played earring-loving Pat Evans in the soap for 25 years until the character's death on New Year's Day, said she was amazed the character was so well received.

She said: "It's strange because even in the early years I thought I'd get hate mail, but I didn't and I think that what people liked was a vivacious go-getting, a person with an interesting history and a person who under it all was really quite vulnerable."

The actress wasn't sure if she was going to miss playing Pat, saying: "She's been my doppelganger all these years, 25-and-a-half years. And maybe I might find myself emerging like a chrysalis from this, from the image of Pat, I don't know. I've never had that image of myself, but the audience probably has and I think I'd hope they'd remember it.

But Pam is certain of what she will miss about the show.

She said: "I am definitely going to miss the people. The cast, many of whom are friends now and will remain friends, so that's fine. I won't miss them because I'll see them, not on a regular basis, but I will see them.

"I'll miss everybody in production and beyond because there's a very tight core of loyal people here, loyal to the show, loyal to each other and they've been in the saddle for a long time and I've known them for a long time."
Email Post
Labels: Pat