Jacqueline: 'I want to work in the Queen Vic' 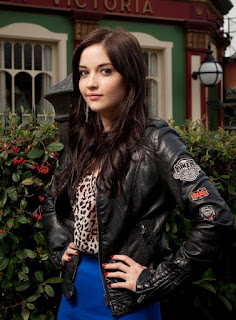 EastEnders star Jacqueline Jossa has revealed her dream is to work behind the bar of the Queen Vic pub in Albert Square.

The 19-year-old actress - who has been shortlisted for Sexiest Female at the National Soap Awards - plays teen alcoholic Lauren Branning and told The Sun that while she hopes Lauren sorts out her problems, she would love her to become a barmaid.

Jacqueline said: "I just want to work behind the bar in the Queen Vic once, then my life would be complete."

The soap star said she can see herself staying in EastEnders for some time, and even hopes Lauren could notch up as many years as Dot Cotton, who has been in the show for 27 years.

Jacqueline said: "I still think there is so much that Lauren can do. She's not finished so hopefully I'll stay here for a little bit longer. Maybe I would like to be like Dot Cotton.

"I still love it, definitely. I have thought about making it in the movies, but I'm young so there is still time for that. I still have so much to learn here. It is like a college for me."

Jacqueline admitted her Sexiest Female nomination had shocked her as Lauren's storylines haven't been sexy at all.

She said: "The other girls are all very, very sexy! How can I be up against Michelle Keegan? I don't know how I am nominated, all I do is throw up!

"Maybe it's because Lauren is just your normal girl, a plain Jane, but maybe people see a sexy side to her."

Jacqueline also said she believed her boyfriend, Tony Discipline, who plays Tyler Moon on the show, should have been nominated for Sexiest Male.
Email Post
Labels: Lauren