Major trauma ahead for Ian Beale 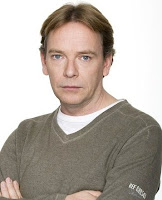 EastEnders fans have been told that Ian Beale is to disappear from Albert Square for a number of weeks as part of an issue-driven storyline on the soap.


The Mirror reports that Ian, who is in financial difficulties, will have a breakdown following what has been described as a "catastrophic blow".

A source said: "Viewers have seen Ian become increasingly frantic whilst trying to juggle his desperate financial affairs as well as many problems within his family.

"His state of mind gets progressively worse over the next few weeks, with Ian disappearing from Walford and his family frantically worried."

The soap's executive producer, Lorraine Newman, is quoted as saying: "Adam puts in a fabulous performance as a man teetering on the edge of a breakdown, who finally spirals when delivered a catastrophic blow by someone close to him."

The Mirror says that actor Woodyatt will be off screen for at least six weeks.

The paper says the BBC has worked closely with mental health charities Mind and Time to Change on the storyline.

Jenni Regan of Time to Change said: "We hope an accurate portrayal of what it's like to have a mental health problem, showing this can happen to anyone such as a businessman or family man, just like Ian, will help eliminate the stigma and taboo around the issue."
Email Post
Labels: Ian