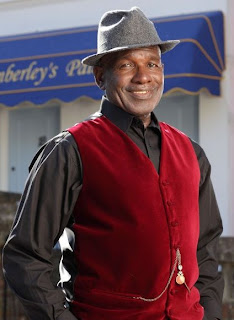 EastEnders star Rudolph Walker has said the show's humour is what keeps him coming to work - despite the fact it has a reputation for being downbeat.

The 72-year-old, who has played the role of Patrick Trueman for the past 11 years, told Inside Soap magazine that the show could be difficuly at times, but it also had its advantages.

"The camaraderie keeps me going," he said. "Being in EastEnders is challenging at this stage in my career, and the demands are far greater than they used to be."

"Turning up on set every day and keeping the character fresh is hard work, but I do it with a smile."

"As long as Patrick continues to run the gauntlet of emotions and there's humour in the show, I'll be happy."

And although Patrick has faced a difficult time lately having been left devastated by Heather's death, things are set to improve for him when he has a fling with Tanya Branning's mother Cora Cross.

"Patrick enjoys the thrill of the chase - and the conquest!" Rudolph revealed. "He'll continue to investigate the prospect and see what happens between him and Cora."
Email Post
Labels: Cora Cross Patrick Trueman

Anonymous said…
well there sure isn't that much humour in eastenders, it's a rare thing, and appreciated when it does happen....kim's funny most of the time, but hmmm, honestly? can't think of any humour off-hand.
Tuesday, 24 July, 2012

Anonymous said…
The so-called 'humour' in EastEnders is what is slowly driving me away from watching it... having been a loyal viewer since the beginning. EE does 'downbeat' and serious and angst very well. The 'humour' is just poor, and caters to the lowest common denominator. Kim is not funny. She is a bloody embarrassment, as is the Zainab & Denise show.
Tuesday, 24 July, 2012

Anonymous said…
why is kim an embarrassment?
i think Tameka Empson plays her part very well,and consistently, and can be very funny, as in comedic.
now some ppl might think billy losing his trousers in his dream funny, but that really is an embarrassment and caters to the lowest common denominator; cruel even.
Zainab and Denise aren't funny, I agree.
as noted, hard to think of an instance of genuine humour.
Tuesday, 24 July, 2012

Anonymous said…
Totally agree with you about Billy losing his trousers in his dream, and about hard to find any genuinely funny humour. But not about Kim. I don't find her comedy amusing at all. Would you be laughing if you had a friend like her, doing the stuff she does? I guess I just like the old-style EE... gritty realism.
Tuesday, 24 July, 2012

Anonymous said…
I've been trying to recall without success some genuine humour, not something contrived. There really is very little, or it's humour that I'm not used to maybe.

I like Derek, Kim, Bianca, Dot of course, they're all earthy and well-balanced characters and EE needs that.
Alfie and Kat have lost some of their former magic, IMO anyway.

No, I couldn't handle a friend like Kim, but she's kind of amusing to watch from a safe distance.

T said…
I agree with the above posters who are not happy with the so-called 'humour' in EE these days. I know they are trying to buck against the nay-sayers who brand EE as being depressing, blah-di-blah, but that's what I always used to like about EE... that it was a pretty realistic drama. The 'humour' is fake, contrived and very grating on the nerves. Above all, it's Not Even Remotely Funny!!! I have now got to the stage where I don't like ANY of the characters. I only watch out of habit, as I have been watching for 20+ years.
Wednesday, 25 July, 2012