Alfie is bookies' favourite to be Derek's killer 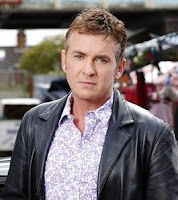 EastEnders' Alfie Moon is the bookies' favourite to be Derek Branning's murderer.

The cheeky Queen Vic landlord, played by Shane Richie, is top of the list with odds of 5/1 for the Christmas Day whodunnit, with Max Branning and Jack Branning in second and third spots at odds of 6/1 and 7/1 respectively, according to William Hill.

Walford bad boy Derek portrayed by Jamie Foreman is set to be killed off in a series of 'explosive storylines' during the festive period, and although details about his death are being kept under wraps, viewers are guessing that he would be murdered.

"Derek is quickly becoming one of the soap's most unpopular characters and just about everyone will have a reason for killing him off by the time Santa arrives in Albert Square," said William Hill spokesman Rupert Adams.

Billy Mitchell, Joey Branning and Alfie's unfaithful wife Kat are also in the running, while Dot Branning and Jean Slater are outsiders.