Patsy Palmer: Ricky and Bianca are meant to be 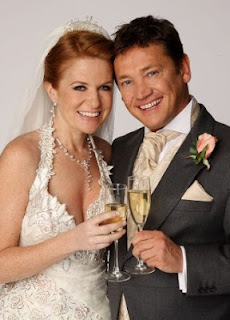 EastEnders star Patsy Palmer who is due to return to Albert Square after a sabbatical has said Ricky Butcher will always be Bianca's real love.

The actress, who took a break to spend time with her family, exited in a storyline which saw Bianca sent to prison for stealing and in her absence co-star Sid Owen, who plays Ricky, also quit.

However Patsy told Inside Soap that the pair who have been married twice despite Bianca having a string of other flings - are meant to be together, in spite of his leaving.

"I think Ricky will always be the man for Bianca - they're such a great couple!" the actress said. "But I don't know if Sid will come back at some stage in the future - I really hope he does."

Sid, who left the soap earlier this year, recently took part in Strictly Come Dancing, although was eliminated on last month's Halloween special.

Patsy admitted she would love him to return to Walford, saying "I'd love to have him here at EastEnders again, but we'll have to wait and see. Who knows? Maybe Bianca could meet someone new one day!
Email Post
Labels: Bianca Ricky