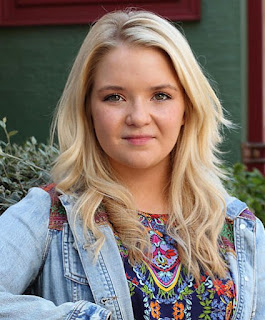 The 16-year-old, who joined the BBC soap when she was 10, admitted some of the things her alter-ego says to screen boyfriend Jay leave her a bit embarrassed.

"They're so cute together. But I do cringe at Abi sometimes," she told Inside Soap.

"She can be very lovey-dovey, and I'm really not. Some of the stuff she says is hilarious.

"Jamie's great to work with. When we have scenes that could be embarrassing, he makes them really easy to get through."

Lorna, who won the Best Young Performance at the British Soap Awards this year, said she still has to pinch herself at times.

"Sometimes I'll just be sitting down and think, 'Oh, I'm on the telly!' I know that I have a really great job," she added.
Email Post
Labels: Abi Branning Jay