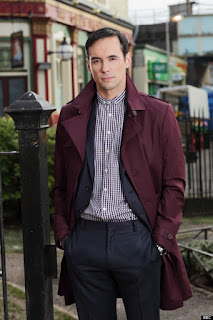 Steve John Shepherd, who plays Michael Moon, has confirmed that he will be leaving EastEnders.

Although it has been reported that he will be quitting the soap opera in June, his character is not due to exit until later in the year.

"After two years of playing Michael, I feel now is the time to move on," he said.

"I have relished every minute of exploring his character. The good and the bad."

The actor has been in the soap opera for more than two years as the cousin of Alfie Moon, played by Shane Richie.

His character also had a relationship with Janine, who he had a child with.

"I feel extremely privileged to have had this amazing experience and I want to thank everybody at EastEnders for their extraordinary support," the actor said of his time on the programme.

"Most importantly I would like to thank the fans for taking him and his numerous flaws into their hearts. I wish them all the very best."

In a statement, Executive Producer Lorraine Newman said: "Steve John Shepherd's wonderful, enigmatic portrayal of Michael Moon has captivated the audience for the past two and a half years.

"Michael Moon will remain on our screens until much later this year and I am sure the audience will enjoy the suitably dramatic end we have planned for the character.

"With Janine's return on screen this month, there's sure to be plenty of fireworks to come."
Email Post
Labels: Janine Michael Moon